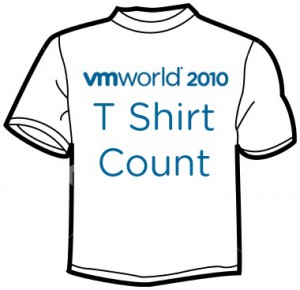 Way back in the day (we’re talking way back in high school here) I worked my summers away at a Six Flags park in Western New York.  Every fall the park hosted an International Food Festival.  Let me tell you – the perogies, sausage and gyro’s slid down like nobody’s business.  But the real prize was the Italian bakery’s cannoli’s.  The 5 or so folks that shared an office with me decided we should track our cannoli consumption.  We did (like you do a drug or spin up VM’s just cause you can) something like 126 cannoli’s in one weekend. We called it the Cannoli Count – kept a tally o a whiteboard in the office.  Sickening, right?  So, what does this have to do with virtualization, you ask.  Well, not much really, but here is where I am going with it.  T-shirts are handed out like nobody’s business at VMworld, and they accumulate like a pack-rat’s pile of newspapers in my dresser drawers (I still have a high-school wrestling t-shirt that dates back to 1994 in the rotation).  My VMware Widow wife hates them, so I figure I’ll see how many more I can collect this week.  With two already in my hands after VMworld check-in, enter the:

I’ll keep the running tally going throughout VMworld – let’s see where this ends up (besides me cleaning out my dresser to avoid sleeping on the couch when I get home).