You are here: Home / Storage / Storage Basics – Part VIII – The Difference in Consumer vs. Enterprise Class Disks and Storage Arrays; or ‘Why is the SAN you are proposing so darn expensive?’ 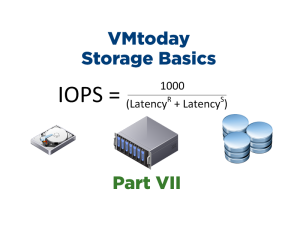 As both an IT Manager and storage & virtualization consultant, I have shepherded SMB’s through SAN purchases in support of VMware environments.  This may not hold true for the bigger IT shops, but as I take these smaller companies through the SAN purchase process, a common set of questions is often asked – Do we really need a SAN, and why is it so darn expensive!?!? I quickly learned that my (cheeky) answer “because it’s enterprise class, baby” just didn’t cut it.  So how do you move beyond “I can get a 2TB hard drive for $100 at Best Buy, why are you selling me on 300GB hard drives for $500 each, and you want me to buy how many?”

For me, the answer boils down to a handful of key factors: performance, reliability, availability, supportability, data integrity, and ease of administration.  When we’re talking business-class workloads, your 2TB USB disk  might have the ease of administration thing going for it (if you can’t plug-n-play that you probably shouldn’t be talking about storage…), but probably falls far short in the other areas.

Disks are the basic building block of storage arrays – usually spinning disks, so we’ll start with looking at the difference between consumer-grade and enterprise grade disks.  (Note: I talked disks back in the early posts in this series if you want to do some catch up reading).  I/O activity on disks make the pretty little lights go blink blink – whether we’re talking the hard drive in my mom’s 10-year old PC or the dozens of FC disks in that newfangled EMC array in my office.  The similarities stop there.

If you want more formal documentation, I recommend reading this whitepaper from Intel that covers some of the differences in enterprise and desktop class drives: https://download.intel.com/support/motherboards/server/sb/enterprise_class_versus_desktop_class_hard_drives_.pdf.  There are always exceptions – I’ve had brand new enterprise class drives show up dead on arrival, and my mom’s poor old 4.3 GB IDE drive is still crunching away.  Check out Google’s 2007 Hard Drive Study results if you want some real life metrics: https://labs.google.com/papers/disk_failures.pdf.  Interestingly enough, Google’s study specifically states that they are using consumer-grade hard drives….

Magnetic spinning media is not the only disk in the game – Solid State Disks’s are rapidly gaining in popularity in both consumer and enterprise applications.  Just like with traditional hard drives, the SSD space has differences between Enterprise Flash Drives (EFD) and consumer SSD’s. Multi Layer Cell (MLC) SSD’s are cheaper, slower, and more prone to errors, but are sufficient for consumer use.  Single Layer Cell SSD’s are typically more performant, reliable, and are often built with improved error-detection/correction abilities.  EFD’s are increasingly working their way into the mid-range storage appliances from several vendors.

If we think beyond the single disk to the array, the same enterprise vs. consumer class questions arise.  I’ll talk about best practices in choosing a storage array for your virtualization project in a later post, but there are a few items that compliment the consumer vs. enterprise class drive discussion that I want to present now.

First, if you’re building a bet-the-business solution, make it complete solution.  While that Drobo, Qnap, or Synology may be on the VMware HCL and is sporting more features than you can shake a stick at, those disks you got for cheap on Tiger Direct aren’t enterprise class, have a short manufacturer warranty, and won’t be supported by the array vendor when you need that support the most (usually 2am on a Saturday).  Nothing against Drobo, Qnap or Synology mind you – I’d love to have one of their NAS devices for my home lab – just suggesting that you think through your decisions and their impact on performance, reliability, availability, supportability, data integrity, and ease of administration.

Second, an array is more than a bunch of disks that go blink blink.  From advanced caching and vSphere integration, to seemingly simple things like rack mount design and vibration dampening, enterprise class storage arrays complex!  Don’t believe me?  Check out this video on shouting in the data center and the subsequent effects of the hard drive vibrations caused by the sound waves.

Speaking of hard drive vibrations and reliability, there are several storage vendors getting creative.  Check out this write up on how Xiotech is innovating: https://www.virtualinsanity.com/index.php/2010/10/18/the-spinning-disks-stay-of-execution/

Need some extra ammunition to argue for that new SAN?  Check out this Hitachi Data Systems (HDS) whitepaper “Is DAS really cheaper than SAN? Storage Economic Methods help to differentiate Price and Cost“.

If you are serious about building a virtualization platform or private cloud environment for your organization, choose components that are built to withstand your workload’s performance and availability requirements.