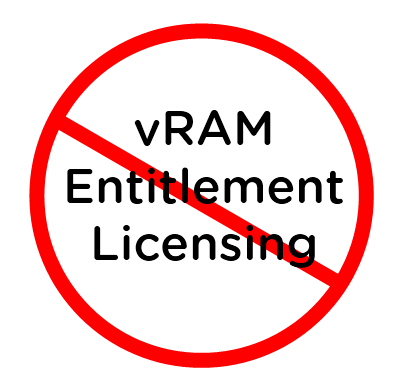 Just announced at VMworld 2012 – VMware has stopped the unpopular ‘vRAM Entitlement’ licensing that restricted customers to provisioning virtual machines with a virtual memory beyond a licensed limit.  The vRAM Entitlements were introduced with vSphere 5 and drew wide criticism despite the fact that few customers were actually impacted by the soft memory caps once N+1 hosts and other design architecture best practices were considered.  Rather, I’d like to think that the vRAM Entitlement licensing may have actually been helpful in getting customers to right-size their VM’s and rationalize standard sizing for templates.  A right-sized VM makes for a much more efficient cloud – less replication traffic, less vMotion traffic, less vSwap on disk, and more efficient Distributed Resource Scheduler (DRS) calculations.  Rationalized standard sizing also helps prepare IT and their business users for consumption-based environments – in their private software defined datacenter run on vCloud Director, in public clouds, or in hybrid public/private clouds.  But what the heck, throw all technical considerations and caution to the wind, go forth and over-provision.  But if you take that approach, you still might have to look at buying VMware vCenter Operations to monitor and alert on your virtual datacenter.

Kudos to VMware for be willing to reverse their licensing change.  In the end, this is good for customers [and us consultants who will clean up after your over-provisioned mess ;-)].