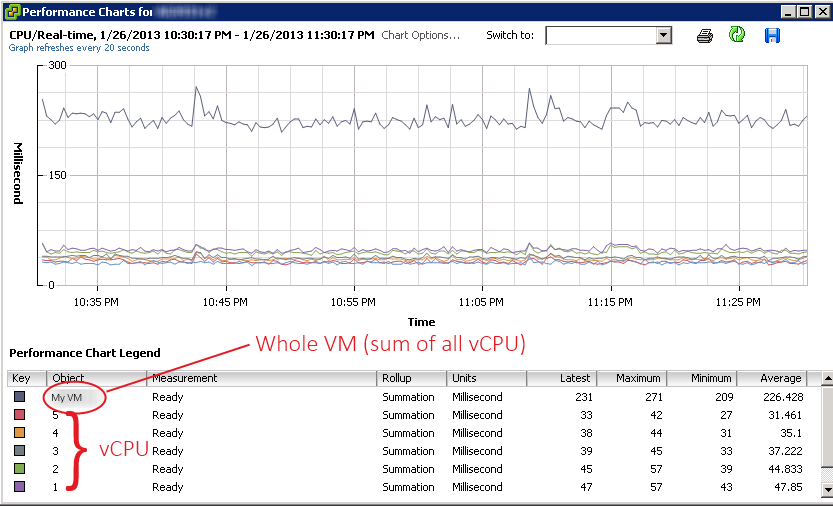 As somebody who struggles with numbers, I don’t want a formula, I want easy.  To save me and my customers from my slow touch-point math, I made this quick set of reference tables to determine at a glance if the CPU Ready summation value I saw in the vSphere client was something to worry about.  I have tables for 1vCPU, 2vCPU, and 4vCPU VM’s.

Note – if you use ESXTOP you see CPU Ready (%RDY) as a percentage, in realtime – no conversion necessary.  If you want to capture ESXTOP realtime CPU ready and then analyze it later, use ESXTOP Batch Mode then analyze in Excel or Windows Perfmon.  ESXTOP counters are explained here: Interpreting ESXTOP Statistics, and here: ESXTOP Performance Counters.

The color coding may seem a bit odd and arbitrary, so here are some real-world numbers to help clarify: If you hit 10 seconds of CPU Ready out of every 20 seconds?  Big deal.  40,000 seconds out of a day’s 86400 seconds?  You’ve got problems. These are easy examples – you’re waiting for CPU cycles ~50% of the time.  But say you hit 90% CPU ready for 10 seconds out of a whole month? No big deal – a blip on the radar (it wouldn’t even show up in the vCenter Statistics Roll-ups).

High CPU Ready for a short period may not be a huge problem, but the numbers can be deceiving.  For example, let’s say you are looking at the Past Year view with a default sampling interval of 86400 seconds (1 day) for a single vCPU VM.  Now let’s say that you see an average summation value of 2,000,000 in the ‘Past Year’ table in vCenter.  That’s 2.315% by our formula.  Sounds low, right?  Not so quick.  As we deal with longer periods of time, the percentages shift a bit from our 10% rule of thumb.

I have reflected this in my charts by marking the increasingly longer intervals with diminishing warning values (yellow and red) – not because it indicates a problem at a specific point in time, but because it could indicate a systemic problem in the environment.  This is where some critical analysis comes in.  Drill into the smaller time intervals (past day) – is that 33 minutes taking place all at once or spread over the day; overnight, during a backup window, when you are exempted from the business hour SLA or is it happening for longer periods at critical times during the workday?  Hope you packed a lunch, cause you’ve got some troubleshooting ahead of you!

I hope the explanations of CPU Ready and the CPU Ready cheat sheet tables are helpful to you.  Questions, corrections, or additions – leave a comment below!

Note: Something ate my CSS that color coded these charts (thanks for bringing it to my attention, Joel!). I’ve fixed it now, but in case it happens again here is a PDF copy of the charts: VMtoday VMware CPU Ready Quick Reference Charts