In previous posts, I covered the basics of Amazon Web Services, Preparing AWS Services to support our sample WordPress workload, and Installing WordPress in AWS with ElastiCache and S3/Glacier backups.  In this post we’ll look at how to configure an AWS Auto Scaling group of WordPress servers that respond dynamically to the load placed on them by creating new EC2 instances on demand, or spinning down unnecessary instances during low demand to save on operational expenses.  Auto Scaling uses AWS Cloud Watch to monitor AWS components and responds to alarm metrics (CPU utilization, number of connections, etc.).

The first thing we need in place to configure an Auto Scaling group of WordPress servers is a command line environment for AWS Developer tools.  Download and configure the Auto Scaling Command Line Tool, the Amazon EC2 API Tools, and Amazon CloudWatch Command Line Tool from https://aws.amazon.com/developertools.  Check out the other tools while you are there as they will come in handy as you increase the level of automation in your environment.

Our last article ended with a complete WordPress server.  We now need to convert that running server to an Amazon Machine Image (AMI).  In the EC2 console, select the WordPress server and click Actions | Create Image (EBS AMI).  Give the image a name and description.  Leave the storage configuration as default when you create the AMI.  Note the ID for the pending image in the confirmation screen:

With our template EC2 instance now being copied to an AMI, let’s go ahead and remove it from our Elastic Load Balancer configuration.  We want to serve our website off of Auto Scaling instances, not a static server.

With our AMI created, we can now configure Auto Scaling.  The first step is to use the Auto Scaling Command Line Tool to create a Launch Config.  A Launch Config defines the AMI, instance type, access key and security group for our auto scaled servers.  Here’s the command:

where WordPressLC is the name of the Launch Config I am creating and the ami-<ID> is the AMI created from our template server. I’ll also define the instance type of the EC2 servers I want created, my server access key and the security group I want my server instances placed in.

A few things to note about this command:

The syntax of these commands is pretty simple so I won’t cover it.   I will point out that after you run one of the above commands you will receive a string value beginning with ‘arn:aws:’ as a return.  Copy this string for each scaling policy you put.

mon-put-metric-alarm wordpress-scale-dn --comparison-operator LessThanThreshold --evaluation-periods 1 --metric-name CPUUtilization --namespace AWS/EC2 --period 60 --statistic Average --threshold 10 --actions-enabled true --dimensions "AutoScalingGroupName=WordpressASGroup" --alarm-actions arn:aws:autoscaling:us-east-1:610328387659:scalingPolicy:be98ea99-91ed-4945-b6be-9612f6a607c7:autoScalingGroupName/WordpressASGroup:policyName/scale-dn --alarm-description "Scale down at 10% load" --unit Percent
(Note: These values are probably too low for a production workload, but I want my demos to kick in quickly.  There are nearly 2000 counters you can monitor with CloudWatch.  Adjust your thresholds and counters accordingly.)

These commands are pretty long, and I’ve found that the order of variables matters on these.  Again, the syntax is pretty clear so I won’t belabor you with explanations except to point out that each mon-put-metric-alarm uses a different arn:aws value from the corresponding as-put-scaling-policy command return values.

You can now switch to your EC2 Console.  You should see a new EC2 instance starting up with the name and the aws:autoscaling:groupname tag assigned in as-create-auto-scaling-group command.  You’ll also notice that your instances are distributed across availability zones.  If you inspect your Elastic Load Balancer, you’ll see your new Auto Scaling instance(s) have been added to the load balancer.

Your site should now load, assuming DNS has had time to propagate.  Here’s my site: 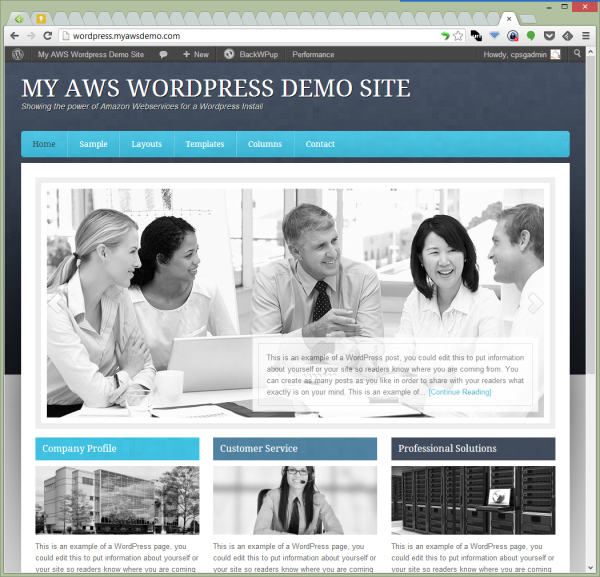 Now we need some users to hit my site so I can see Auto Scaling go to work when the servers come under load.  I’m pretty sure I can’t get a rush of users to visit my demo site, so I’ll simulate a load using Siege (you could also use https://blitz.io).  I have Siege running in an EC2 instance, and prepopulated with a list of URLs for my site that I plucked from my XML sitemap.

To simulate a user load, I ran Siege for 500 seconds and simulated a user count of 20 against my URLs file created from my sitemap:

Within a few seconds I can see Siege begin working.  The output from Siege will show a steadily increasing access time for my site until connections begin to time out.  If you pay close attention, you might see the access times briefly improve as the ElastiCache is warmed, until the server is overwhelmed (I chose the micro instance because it’s not too hard to bring it to its knees in a demo). 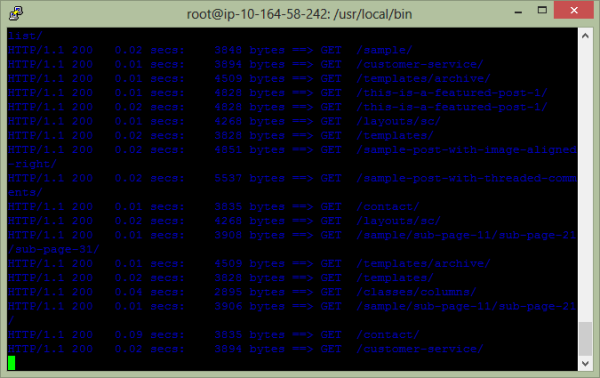 As Siege is running, check out the monitoring tab on your Elastic load balancer.  You will see an increasing connection count and instances that become unhealthy as they fail to respond to health checks.

You can also switch to the CloudWatch console and see that the alarms you created in the command line tool are displayed and the scale-up alarm is triggered: 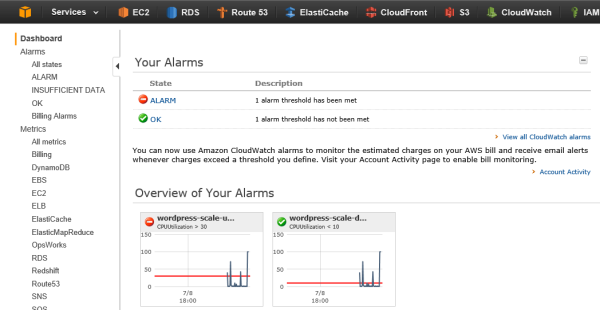 If you browse to the site under siege it is sluggish at best – probably unresponsive.  Once our grace periods, evaluation periods, and cool down periods are passed, you’ll see new EC2 instances being spawned by your Auto Scaling policies:

These instances will be added to your ELB once healthy and your response times will begin to improve.  Notice in the screen grab above that the 3 instances currently running have been equally distributed across availability zones.  If you reconfigure Siege to use a greater number of users and you’ll see more EC2 instances being created in response to your load.  You can continue this until you have reached the maximum number of instances defined in your Auto Scaling Group.  After the maximum number of instances has been hit, your site may become unavailable until the siege is lifted.  This is where AWS Simple Notification Services (SNS) would be good to have in place.  SNS could send notifications to administrators that thresholds and limits are both being exceeded and take action to correct the situation.  Remediation options would include raising the maximum number of EC2 instances in the Auto Scaling group, updating the Launch Configuration to use a more powerful instance type (t1.micro to m1.large, for example).  Additional ElastiCache nodes could also be added on demand, or the RDS database instance could be upsized on demand if it is determined that it is the bottleneck.

Scaling Down After Demand

Once the siege has been lifted and demand drops, our scale-down policy will begin shutting down un-needed EC2 instances.

Because we only pay per hour for instances that we consume, our scaling will cost little while meeting the demands of our workload.

And there you have it – an auto-scaling WordPress environment that takes advantage of a host of Amazon Web Services:

I hope that this series has provided you with a basic understanding of Amazon Web Services and how a real-world workload can be deployed and scaled automatically on AWS.  I have simplified quite a bit in this series of articles – if you have questions or need help architecting a solution on AWS, integrating your on-premise VMware cloud with public clouds, or understanding how to use the cloud for backup and disaster recovery, feel free to reach out to Clearpath – We’re happy to help!