You are here: Home / Archives for clariion

I upgraded my in-house VMware vSphere environment to 4.0 Update 2 last week.  After upgrading my vSphere Client to the Update 2 version I was greeted with a series of 7 ugly error messages stating: Method not found: ‘VMware.CustomControls.LabelEx VpxClient.Common.Util.Helper.AddLabel(System.Windows.Froms.Control,Int32, int32, System.String, System.Drawing.FontStyle, Boolean)”.

I assumed a plug-in had caused the error message.  I started my troubleshooting by disabling the 3rd-party plug-ins in the environment, beginning with the free EMC Storage Viewer.  Upon disabling the EMC Storage Viewer 2.x plug-in the problem was resolved.  I went out to EMC PowerLink to see if an update was available for the plug-in and was surprised to find that I had missed a major update/rebranding of the plug-in.  EMC now calls the plug-in the ‘EMC Virtual Storage Integrator’.  A hotfix was released on July 2nd to bring Update 2 support to the plug-in (version 3.0.0.32). 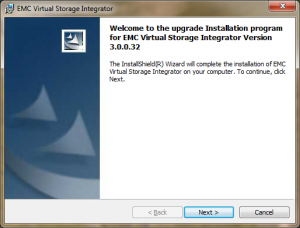 The update appeared to install without any problems.  The vSphere Client launched like a champ after the update – no errors, but no EMC Storage plug-in either.  Odd.  The problem occurred on both my vCenter Server’s vSphere client and my workstation, so seems to be more than an isolated issue.

I did an uninstall of the plug-in using Add/Remove Programs, and then reinstalled it.  After the reinstall the EMC Storage plug-in icon appeared in my vSphere Client as pictured below.

The EMC Virtual Storage Integrator (VSI) plug-in is free – installing it is a no-brainer for anyone running Clariion or Celerra storage arrays.  The VSI simplifies the job of mapping vSphere Datastores to LUN’s and NFS shares on your EMC storage, and helps pinpoint the location of VM’s and RDM’s on your array.  This visibility for the VMware administrator into the storage layer can go a long way in helping troubleshoot storage performance issues and simplifying communication between server, storage, and virtulization teams. 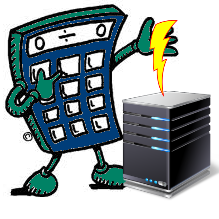 We all know that virtualization allows us to do more with less.  Fewer servers and space-saving storage (talk about an oxymoron) help us put some green in the datacenter and back in the budget.  But with tight budgets demanding greater efficiency, virtualization pushing per-U-space utilization higher, and increasingly rack-dense equipment, proper planning of your physical plant remains an essential part of IT.  I argue that right-sizing your power, cooling, and floor-space is more critical now than it has ever been, and is a knowing how to do it is a darn good skill for a virtualization engineer to possess.

So along those lines… I was just doing some site-prep work for a new Clariion installation and noticed that the EMC Power Calculator has been updated.  It is now a pretty slick little web app that can be found on the PowerLink site (login required) here: https://powerlink.emc.com/nsepn/webapps/powercalculator/Main.aspx.

While I am at it, here are some links to other power consumption calculators.  Let me know if you have others and I will update this post:

There’s some fun and timely chatter happening right now on Twitter around power consumption and sizing – join in by following me at https://twitter.com/joshuatownsend/!