You are here: Home / Archives for Mirage 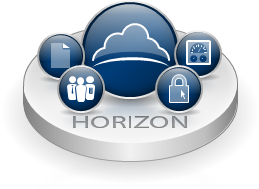 VMware Horizon Suite and all of the components that make up the suite were made Generally Available (GA) on Monday (March 4, 2013).  VMware Horizon View 5.2, VMware Horizon Mirage 4.0, and VMware Horizon Workspace 1.0 versions are available as stand-alone products or all bundled into the Horizon Suite.  This is an exciting set of releases from VMware.  I wrote a summary of the releases last week if you don’t yet know what is included in the upgrades and new products.

With GA came information on pricing and licensing for individual products and for the Horizon Suite, which includes all of these components under one SKU.  With the full Horizon Suite licensing, IT gains a comprehensive set of tools to manage endpoints and provide users with increased levels of service and availability.

Here’s a breakdown of which components are included in the currently available licensing bundles:

** For use in Windows version migrations only during 6 month license period, no end-point backup or other management tasks

VMware has also moved several products to End of Availability (EOA) status, meaning that you’ll no longer be able to buy them.  EOA products include VMware View Enterprise Edition, VMware ThinApp, and Horizon Application Manager.  If you own these products, there are upgrade paths to non-EOA products.  For customers who hold active Support and Subscription (SNS) for standalone ThinApp licensing, VMware View Enterprise Edition licenses (Add-on and Bundle), and Horizon Application Manager, the upgrade paths are as follows: 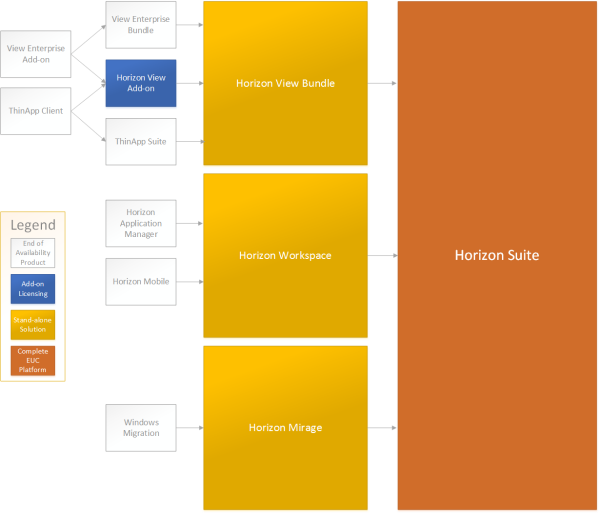 P.S. VMware has extended the offer for a free upgrade from vSphere Enterprise Plus to the new vCloud Suite Standard licensing until March 15, 2013.  VMware vCloud Suite Standard includes vSphere, vCloud Director, and vCloud Networking and Security.  If you are interested in automating and securing your VMware infrastructure with the power of vCloud Director and vCloud Networking and Security don’t wait on this deal.  There is a $1 per socket upgrade charge on this, so you’ll have to work with Clearpath to get the upgrade completed before the deadline.  I have more details on the Free vCloud Suite Promotion here.

I’ve had questions from customers and have seen some musings on social media about a VMware End of Availability Notice (EOA) for VMware ThinApp.  I thought I might set the record straight here.  The EOA notice is posted on the VMware ThinApp How To Buy page, with a PDF FAQ document here: https://www.vmware.com/files/pdf/thinapp/VMware-ThinApp-EOA-FAQ.pdf.  From the How to Buy page, we read that ThinApp will no longer be available as of December 15, 2013, with no orders for ThinApp being accepted after that date.  This is crappy wording by VMware.

ThinApp is not being discontinued!  The current stand-alone licensing scheme for ThinApp client licenses and the ThinApp Suite (including ThinApp client licenses, ThinApp packager, and VMware Workstation) are being discontinued.  ThinApp as a technology is alive and well, and is more important than ever with the launch of VMware View 5.2, VMware Horizon Workspace, and VMware Mirage – products all capable of delivering ThinApp virtualized software into the end user computing environments that they support.  For those who have heard me speak on VMware’s end user computing solutions at VMUG’s, VMware Knowledge Series, or Clearpath events know that ThinApp is an important element in the abstraction or decoupling of the apps that our users care about, and the Windows OS as the tool that we still need to run those apps.  Decoupling enterprise apps from traditional workstations is a huge part of enabling bring your own device (BYOD) and the shift from IT servicing devices to IT delivering services to our users.  ThinApp isn’t going anywhere.

Horizon View, Horizon Workspace, and Horizon Mirage all have the ability to push ThinApp packages to the endpoints that they manage, so it makes sense to bundle ThinApp with these solutions.  I do have mixed feelings on dropping stand-alone licensing for ThinApp as I’ve had several instances where the problem required only ThinApp.  I’ve also grown accustomed to having ThinApp packages of my common apps sitting in a DropBox share so they are always available no matter where I work.  But as I think about it, that’s the point.  Users shouldn’t be maintaining their own apps – IT should be delivering them as a service, keeping apps patched, fast, easily accessible.  And that’s just what the Horizon suite of products is about – all apps and user data delivered where, when and how our users are demanding them.  I guess we really are on the horizon of something really cool in end user computing, so long as IT is willing to rise to the challenge of new demands and new technologies that strike a balance between end-user freedom and IT control.

Update: If you missed the webcast, you can watch the recorded session playback here: https://clearpathevents.webex.com/clearpathevents/lsr.php?AT=pb&SP=EC&rID=5836487&rKey=29a86bf8d53cdfc8 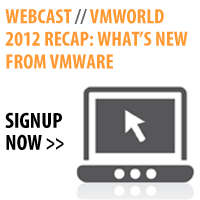 In keeping current with the latest news from VMware, Clearpath’s team followed all of the breaking developments at VMworld 2012 to observe and report on all the changes and updates in VMware’s portfolio. But whether you’re in the know or still catching up, how will you leverage these improvements to positively impact your organization? And, how will you plot the roadmap to transition your infrastructure and systems without disrupting workflow?

Join us Tuesday, October 2nd for the webcast “VMworld 2012 Recap: What’s New from VMware”. Virtualization Practice Manager and vExpert, Josh Townsend (that’s me), will be reviewing new information on vSphere 5.1, vCloud Director 5.1, vCloud Suite, VMware Mirage and VMware Horizon; as well as reviewing important details on implementation and how to take advantage of current upgrade promotions. Don’t miss this opportunity, signup for this webcast today!

Another great day at VMworld 2012 in San Francisco.  This morning’s keynote featured VMware’s CTO Steve Herrod explaining VMware’s vision for end user computing (EUC).  We’re in the middle of a fundamental shift in EUC, where the days of IT telling users what to do are over.  IT needs to respond with new, transformative technologies to broker, secure, and deliver the apps and data that users are demanding to any device, anytime, anywhere.  To accomplish this, VMware has highlighted a few of their technologies in their growing EUC portfolio.

Next, Steve Herrod highlighted VMware’s recent acquisition, Wanova Mirage.  Mirage is a pretty slick technology that allows IT to layer the various pieces of a desktop environment – OS, apps, data – for simplified deployment and management of desktop/laptop assets.  Mirage fills the void of managing offline and mobile assets, while allowing the desktop computing environment to utilize all of the horsepower of today’s modern PC equipment.  Mirage also brings new options for desktop DR, deployment, and upgrade.

A cool demo of Mirage in action grabbed everyone’s attention – an in-place upgrade of a mobile user’s Windows XP laptop to Windows 7, complete with application and user data migration.  When the user lost his laptop, the same image he was using on his laptop was pushed, with Mirage, to View where the user could quickly resume work from his iPad with all his apps and data in place.

VMware also showcased what they are calling Project AppShift for User Interface Virtualization (UIV).  UIV provides a slick overlay, giving tablet users an optimized UI for interacting with Windows, including touch, gestures, and mobile-friendly menus.  This will make the View experience from Android and iPad tablets much better.

These technologies will be in beta later this year, and General Availability expected in the first half of 2012.

Tonight, Clearpath will be hosting a customer dinner for those who are in attendance at VMworld.  We’re looking forward to discussing these new technologies with our customers as we work together to map virtualization strategies against this weeks announcments.