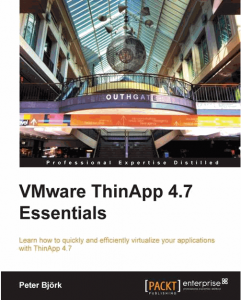 ThinApp is an essential piece of VMware’s end user computing portfolio as it acts as the decoupling agent between legacy Windows applications and the underlying operating system.  Leveraging ThinApp allows administrators to overcome application compatibility issues while providing new application deployment options to both physical desktops as well as VMware View desktops.  ThinApp does this by virtualizing everything that makes a Windows app a Windows app – registry entries, DLL registrations, Program Files directories, and user personalization – into a single .exe or .msi file.  The ThinApp application runs in a sandbox on any computer without the need for a locally installed agent or any significant datacenter infrastructure.  The power of ThinApp can be further extended with VMware Horizon Application Manager – an ‘App Store’ for the enterprise.

Packt Publishing has released a new book on VMware ThinApp: VMware ThinApp 4.7 Essentials, by Peter Björk.  I’ve got the book on my Kindle and thought I would share a bit about it.  VMware ThinApp 4.7 Essentials provides great detail on ThinApp architecture, the basics of application packaging, deployment of ThinApp packages (including details on using Horizon Application Manager) ThinApp project updating, and design considerations.  There’s also a great section on testing and troubleshooting ThinApp packages – usually one of the hardest aspects of ThinApp.

Whether you are just starting out with ThinApp, or have been using it for a while and want to increase your knowledge and skills, this book is packed with great detail.

While I’m on the topic of ThinApp, I should also mention that VMware released ThinApp 4.7.3 last week.  The release notes for ThinApp 4.7.3 are here: https://www.vmware.com/support/thinapp4/doc/releasenotes_thinapp473.html.  Of note in this release is support for packaging and running ThinApp virtualized applications on Windows 8, and introduces a new parameter that can help overcome conflicts between ThinApps.  ThinApp 4.7.3 also fixes 40-some issues, including problems with virtualized Internet Explorer, Firefox, Microsoft Office, and Camtasia.